It sounds like a great idea: Host a barbeque. Have your current customers come and bring their friends. Invite the community. For every hot dog eaten and for every quote you prepare, donate money to a popular local charity. Have fun.

For Chris Nordyke State Farm, the only downside to his monthly barbeque event, held twice so far this summer, has been running out of hot dogs.

“I think that’s happened both times,” agency owner Chris Nordyke said. “We’ve had to scramble and run to the store to get more hot dogs.”

Nordyke said that the completely free event serves as a customer appreciation time and attracts potential new customers in a low-pressure environment. His agency donates $1 to the Corvallis Boys & Girls Club for every hot dog consumed and $5 for every insurance quote provided.

“We’ve raised more than $550 so far,” Nordyke said. The company originally had a goal of donating $500 total, but as they’ve exceeded that amount with one more event to come on August 3, they’ve raised the bar to $1,000. 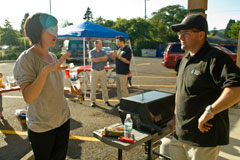 ” Rebecca Badger put together a flyer for me,” he said. “I sent that out to a ton of people. I sent it out to people on my email list and I had Jennifer Moore send it out to her board at United Way and Helen Higgins sent it to her board at the Boys & Girls Club.”

Other local businesses have seen the popularity of the events and have gotten involved, often giving samples of food for free. 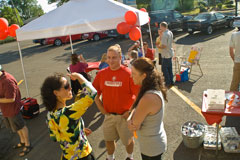 “Jason Heckel from Cold Stone Creamery came to me proactively and said, ‘Hey, do you want ice cream at these events?’ He brought a ton of ice cream for free to the events,” Nordyke said.

At the August 3 barbeque, Rocket Queen Cupcakes, Weinsteiger Beer Mustard and the First Alternative Co-op will join Cold Stone in offering free samples. Cheryl Simmons, LMT from Body of Health will give free massages and the Corvallis Fire Department will have fire engine tours. Nordyke will pay a reduced fee to have the Corvallis Pedicab on hand for rides and to have a Hawaiian shave ice stand, as well as music from the band Gumbo.

Does an event like this one really help the business bottom line? Nordyke said he’s written 10 to 12 quotes and gained three or four new customers at each of his two previous barbeques.

“All in all, including the donation, the total cost for our agency for the event is probably going to be about $800 (per event),” he said. “It’s been expensive, but it’s been a fun way to spend the money. And I think long-term it will have a great net effect.”

The third and final barbeque will be held from 5 to 7 p.m. August 3 in the parking lot at Chris Nordyke State Farm, near Albertson’s at 1945 NW Kings Blvd., Corvallis.

Recently on the Blog: